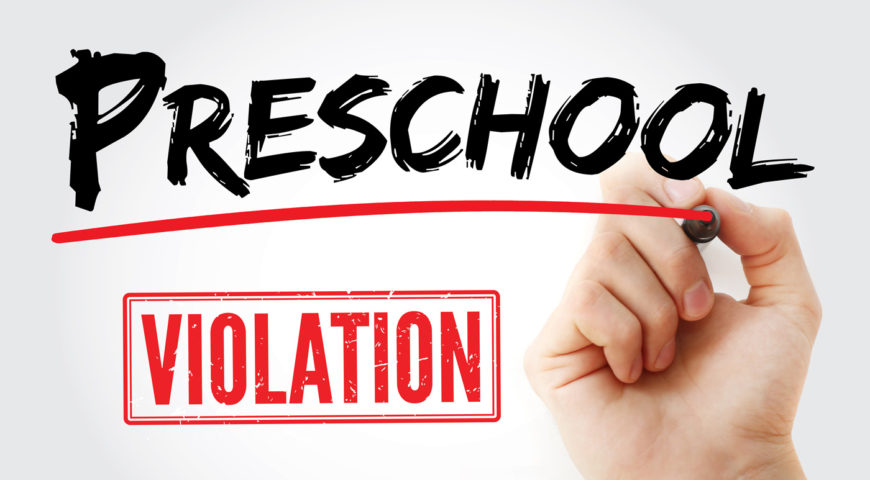 It’s a feeling no business owner ever wants to feel. However, it’s this very feeling that Florida’s licensed childcare providers feel almost every day when inspectors suddenly appear ready to investigate alleged violations.

Other than for the annual licensing inspection, DCF or Local Licensing generally will not come to your centers unless something went wrong. For example, a child was injured, a child was abused, a parent placed a complaint, or, even worse, a disgruntled staff member filed an anonymous complaint.

What did we do wrong to cause the violations?

This is the question that childcare owners and operators and directors instinctively ask themselves. The actual answer may vary, but often times the response is “nothing.” That is, the owner/operator did nothing wrong themselves. Rather, it was a staff member who made a simple mistake, such as leaving a purse in an unlocked cabinet or a staff mistakenly counting the number of children during attendance because she got distracted. For the vast majority of violations given to providers, it is the carelessness or negligence of staff that results in violations – not the owner’s/operator’s actions or inactions.

What can be done?

Once Class violations are issued, it is similar to a grand jury issuing an indictment. You have been charged not with a crime, but with a violation of the applicable childcare licensing rules and regulations. Some providers, thinking that they have no options, simply accept “guilt,” pay the applicable fine, and try to move-on with their daily business operations.

Often, they are ignorant of the fact that they have rights. They have a right to challenge the violations by filing an appeal. They have a right to require DCF or Local Licensing to prove the allegations against the provider. Many providers don’t even bother appealing the violations because the task seems daunting and overwhelming – especially for an owner/provider who is not legally trained and may not know all of their rights.

In addition to being a licensed attorney for over 23 years, I was the hands-on owner/operator of a large private preschool in West Palm Beach for over 7 years. I was also on the Board of Directors of F.A.C.C.M. from approximately 2014-2016.

Eric just “gets it” because he has been in your shoes. He knows first-hand the sinking feeling in you gut when DCF or Local Licensing knocks on the door. He can relate to your stress and anxiety because he was in the same place when violations were assessed against his center.

Eric is aggressive in representing his clients and forces Licensing to prove its case and allegations.

Having been an owner/operator for so many years, Eric understands not just the language of the rules and regulations, but how they are implemented and where they conflict. You would be surprised to learn how many inspectors don’t truly know all of the rules – but only focus on the main ones they try to enforce.

If you have received Class 1 or 2 violations, or received notice from your ELC that they plan to terminate your SR or VPK contracts or place your center on probation, Eric is here to help you. The quicker you retain counsel to represent your interests, the easier it usually is for Eric to gather evidence, interview witnesses and prepare your defense.

Remember, DCF, Local Licensing and the ELC have their own attorneys working for them. Don’t you also deserve your own Legal Wiz 4 Childcare Biz working for you?

Eric is available for a free initial phone consultation.  Please call 954-272-8292 today and speak directly with Attorney Eric B. Epstein – the Legal Wiz 4 Childcare Biz. You may also visit his website at LegalWiz4ChildcareBiz.com.

Law Office Of Eric B. Epstein, P.A. - By Appointment Only